steal this idea: the bandwagon we should all be on

I’m not at all surprised to read that someone came up with this idea before the artisan claiming she’s been ripped off. 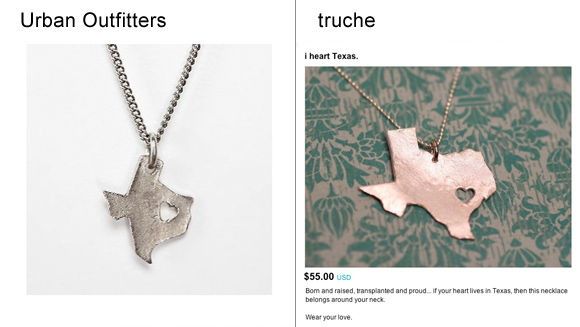 That’s how ideas work. Sure, there are plagarists out there to be sure — lazy or just plain uninspired parasites that have no shame in profiting off someone else’s vision. But people are wired to imitate. That’s how we learn. We can’t just shut it off. And we are so constantly bombarded by images and ideas these days we aren’t even aware of half the things we’ve seen. But they are there, in our subconscious, waiting to emerge.

I made two pieces this past week that I know were inspired by the shapes of things I saw out there in the universe in passing. Nothing specific — I know I’ve seen things “along that line” somewhere, but I didn’t consciously try to replicate anything in particular. Still, the concepts were in no way “original” to me and if you can make a better version of something I’ve made, go for it.

What matters to me is that I had an idea in my head given the ingredients I had on the table and I was able to render it, according to my own sense of style. And if you were to buy one of those pieces, you would be able to say it was made by an artist in Scranton who you paid directly with no corporate siphoning or exploitation.

Just looking at the two pieces below — which would you rather wear? Truche should be touting her superior craftsmanship (although I’d personally have to replace that ball chain), not her originality.

The line that really stands out to me in this post is:

“I’ve also been seeing an increase in the amount of made-to-look-handmade shit being hawked at hipster meccas like Anthropologie. So the fact that the handmade aesthetic has been seeping into the marketplace like a toxic mold has not gone unnoticed.”

The idea of people buying mass produced items made to look as if they were handmade is the great absutdity of capitalistic world order trying to hang on to its market share until this trend is over.

It’s a trend if we let them. It’s a revolution if we fight. Let’s just make sure we’re fighting the right battles. Their factories can make anything we can make for a lot less money and get it in front of more buying eyes.

What we can do is make one-of-a-kind, custom, pieces that aren’t going to break in a week. Or if by some chance they do, we’ll fix it for you at no cost to you.

Mending clothes the other day, I noticed that all of the garments these garments that had come apart at the seams — minus one vintage sundress that was just old — had come from Target. Stylish items but cheaply manafactured. Their cost cutting failure is pushing me closer to the sewing machine. Why should I spend any of my hard-earned money clothes that aren’t sized right and are cheaply made in foreign economies at the mercy of wealthy stockholders? I shouldn’t. And I’m slowly learning how to get along without. And every day, it seems there are more and more people thinking the same way.

Handmade is more than just an aesthetic. It’s the future. It’s progress. People taking whatever control they can back over their lives. And everyone needs to get on the bandwagon. Conscientious, sustainable living is not an idea we can afford to let anyone own. Steal each and every idea that works for you.

We can’t make our own computers, but we can make our own food — or more of it. Or buy more of it from private, local growers. We can use energy more consciously and gradually choose to produce some of the energy we use from sustainable sources. Spend a little more upfront — the investment is worth it. We can produce as well as consume. It doesn’t have to be a trend. We can each do little things to make the world better. We have to try.