A writer's blog by Alicia Grega

Because you have to say “good morning” or make small talk
as you pass the three people out so early with shovels
on the morning of a blizzard
on your way to a meeting
because somebody might relapse today
and if he does, it won’t be because you weren’t responsible.

Can’t listen to the usual *podcastaudiobookspotifybbcradio* headphones
walking down the middle of the street
or you won’t hear the car that’s not going to drive up behind you.
For the next two days all you’ll see are urban redneck pickup plows
and a few fearless SUVs.

It was worth leaving the house to hear a girl called “snow onion.”
There are eight of you that showed up,
who did not make excuses and will carry out the rituals.
Sober alcoholics are more reliable than the post office.

On the trek back home,
after your first blizzard kiss,
fracturing like a wishbone to work from separate homes,
you pass the little Buddha postman
walking in uniform to the office even though he knows
they won’t be carrying today.
It will be Stella that stops the mail,
not a failure on his part to take his oath to heart.

You stop in the neighborhood store because it is open.
Praising the brother and sister owners,
you purchase food you don’t need to show support.
You are their first customer but there will be others.
And now you have to make a blueberry pie.
It is pie day, 3.14, you realize after the fact.
You’d been craving cherry pie since the namedrops at Grandma’s funeral,
but the cherry filling was full of hi-fructose corn syrup,
so you bought frozen blueberries instead. 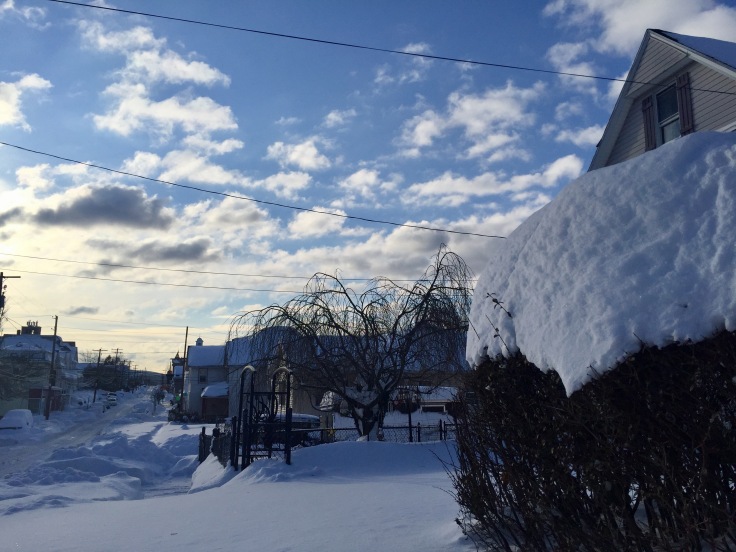 On the second day, you learn to follow the men and walk in their boot prints, how to turn your back into a snow squall,
that it’s safer to walk in all-black ski clothes at night against the infinite white.
He walks you home and you remind him to realize this may be your last blizzard kiss.

On the third day, you break down the ice wall erected overnight by the snowplows
so your daughter has a place to park when she comes home.
You hope she knows that love is shoveling snow
as lukewarm coffee trickles through your numb lips
down your face smeared with snot that didn’t fit in your pocket tissue.

But at least it has stopped snowing,
you realize as the sun rises through inevitable blue and distant puffs,
In the flood of reflecting light you see that snowdrifts are not white at all
but shades of shadow and sparkle, pockmarked erosion and fossil fuel tinted chunks of ice.

This is the first time in months you are glad to be
a part-time teacher looking for work
because no boss is waiting for you at the office.
Later, you will extemporize about the inequity of snowfall.
How the owners and the managers park in garages,
own snowblowers or pay groundskeepers,
and don’t have to shovel out by hand.
They don’t understand how hard it is to be poor,
unprepared, stranded, alone, weak, or overwhelmed.

It is sad people are suffering,
but you are grateful to this blizzard for melting your writer’s block.
You are happy to be strong enough to move so much weight by yourself,
though you won’t miss hair getting caught in the zipper of your parka
the morbid cold sweat that soaks your bra and T-shirt underneath,
the thirst you cannot quench
or awkwardly pixilated Streetcar Brando Kowalski screenshots.

Tomorrow it will hit 40 degrees.
Stella will dissolve into memory and legends
to be passed down to babies conceived in this storm.
For now, in this moment, your favorite sound is shovel scraping pavement.
You marvel at the difference between the isolated muscles used to aching from the gym
and the full-body force demanded by the blizzard.
You wonder why the birds sound so happy with no food in sight.